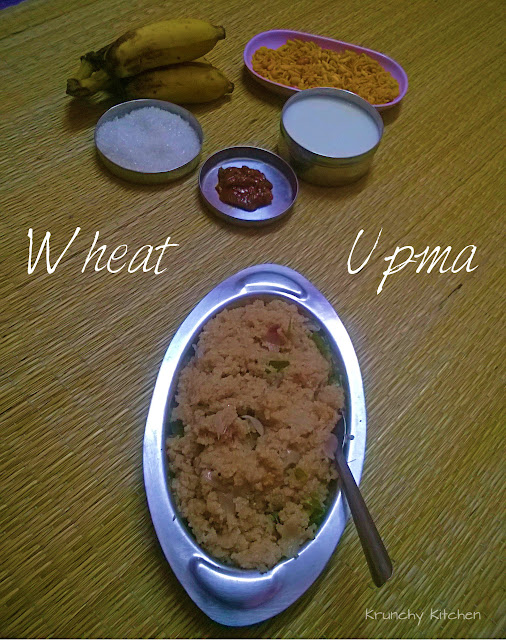 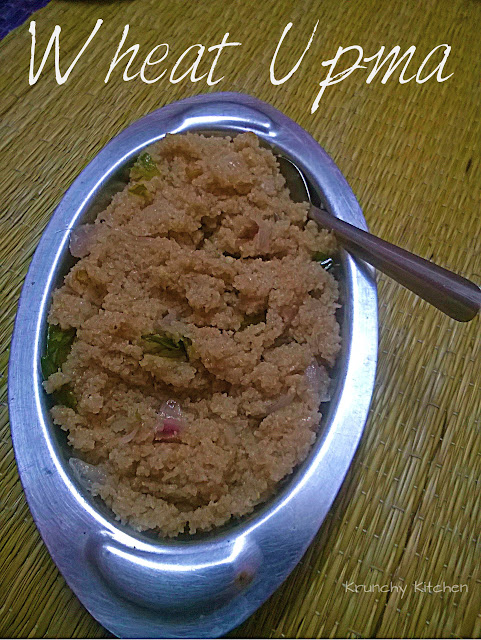 Read more »
Posted by Krunchy Kitchen at 22:54 No comments:

Thayri Thalippu is served as side dish for idly and dosa. It will actually require a minute time to prepare. Very very easy and different yummy side dish. If you want to show variety in side dishes you can prepare Thayri Thalippu as one. I hope amma did it twice or thrice (a long back), appa did't like so she stop doing it.  My Periyamma will do this often since I like it when ever i go to her home she will make this along with other side dishes.

I always wonder how the simple curd turns into yummy side dish in a minute. 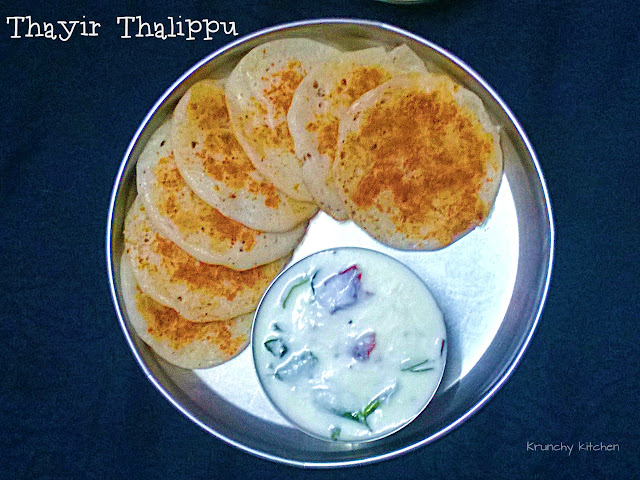 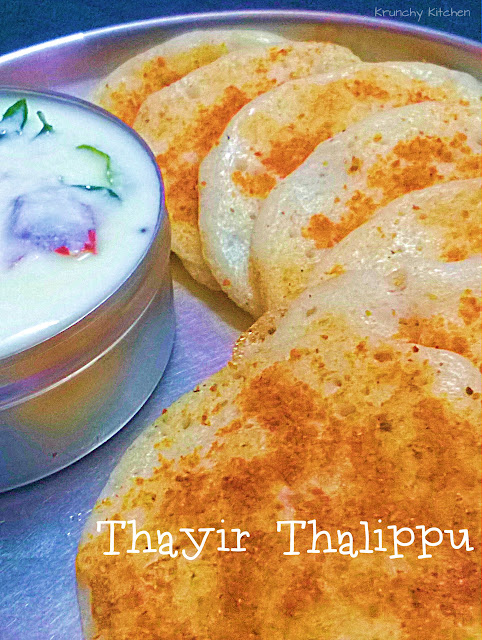 Egg is my thambu's favorite. Any thing in Egg he likes very much. I won't eat egg thought where ever i see egg recipe i read it because if i make it to my thambu means he will enjoying eating it. I love to cook egg for him. While cooking egg he will come and stand near me in kitchen and help me for cooking. He is really a chatter box he will be keep on talking. I am the one who enjoy's every thing he does even naughty things. When ever i cook egg i will remember him but this Egg Cutlet is made for my dad. One rainy evening he enjoyed this Egg Cutlet with a cup of tea. I am missing you thambu (Shaaswath)....

Egg Cutlet has many shades. Each people will do in their own way. This is my first try. I did it very simple with the ingredients i have in my hand. I will be keep on updating all Egg recipe's in all the shades because i am preparing my self to make many tasty egg recipe's. One day definitely i will do all to my dear thambu..... 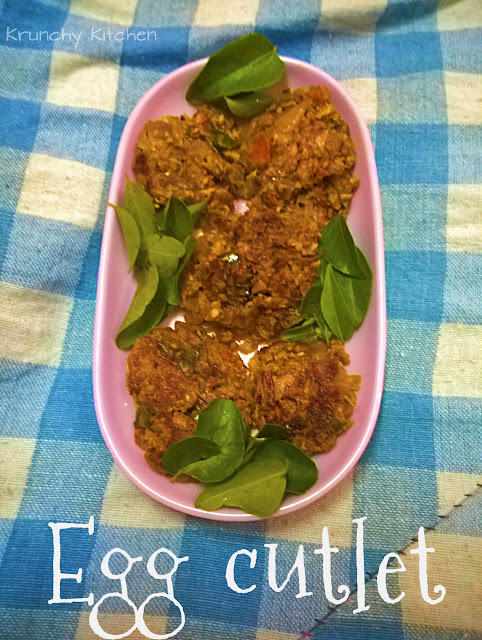 Read more »
Posted by Krunchy Kitchen at 02:08 No comments:

Idli Upma is an excellent recipe with the leftover idli. In our home its totally opposite we make idli to prepare Idli Upma. Amma likes Idly, appa and me are dosa fan's but we both love this Idli Upma. Usually amma will make batter in morning's so the next day dinner will be surely Idli Upma. I always wonder how this Idli Upma gets more taste than Idli. Idli Upma is my all time favorite. I wont at all complaint to have it even for 3 times a day. It sounds unique because the bored idli will change into tasty upma in min's without more effort and ingredients. If you feel bored or feeling lazy to cook side dishes, you can make plain Idli  into tasty Idli Upma and enjoy. You can serve this Idli Upma in snacks time too. 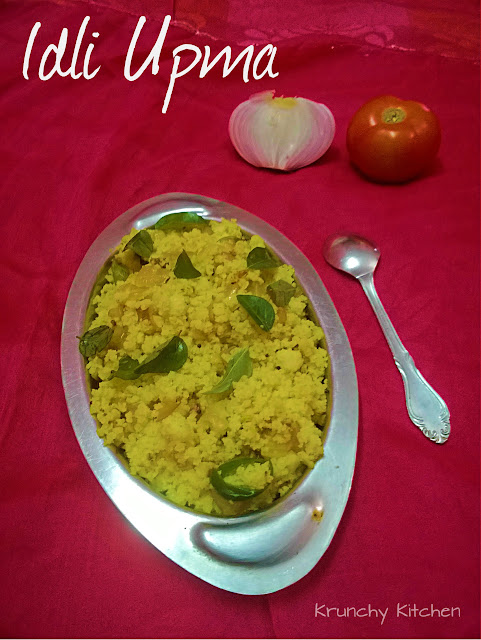 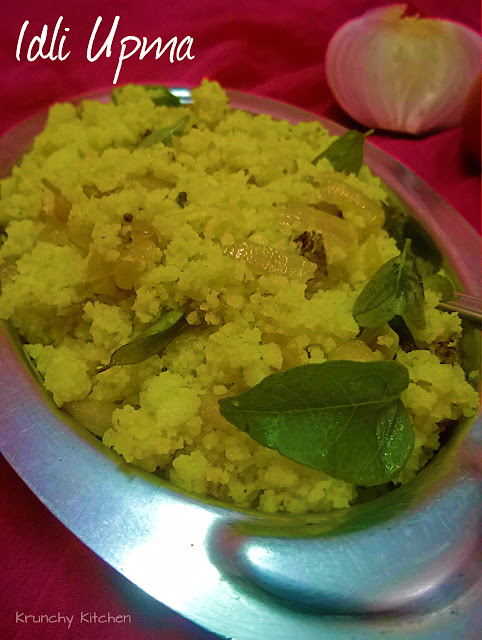 Read more »
Posted by Krunchy Kitchen at 23:34 No comments:

I could say my passion and interest towards cooking is taking me to all the extents, which i taught I wont do. Since I am vegetarian i wont even like the smell of non veg. Usually i will make my mom to prepare food for me before eating non veg on Sunday's.When the whistle comes while pressure cooking the kudal i will shout at mom, while i am cooking Kudal Kulambu my mom was saying all those things i did. Among all non veg recipes the smell of Kudal is the most i hate, but now after i started cooking i cleaned the Kudal and made Kudal Kulambu. Even i can't believe on me. Yes !! its me all because of my cooking passion and interest.Its for my mom and dad, they just love this Kudal Kulambu a lot. They won't complaint if this Kudal Kulambu fills their tummy on Sunday's.

When ever i think of this recipe my attai will comes first into my mind. Because she will say,she feels more energetic after eating Kudal kulambu and i think that is true. Kudal Kulambu has many health benefits. It increases your blood count very soon and so on.

Kudal Kulambu is very easy to cook so try doing it and eat along with Idly in morning and with rice in afternoon. 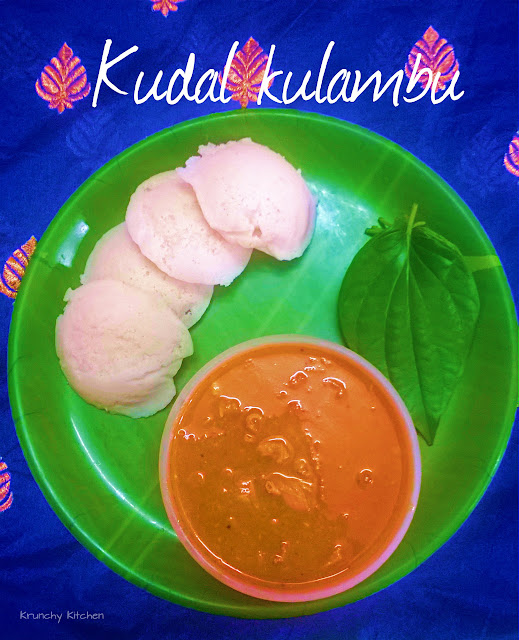 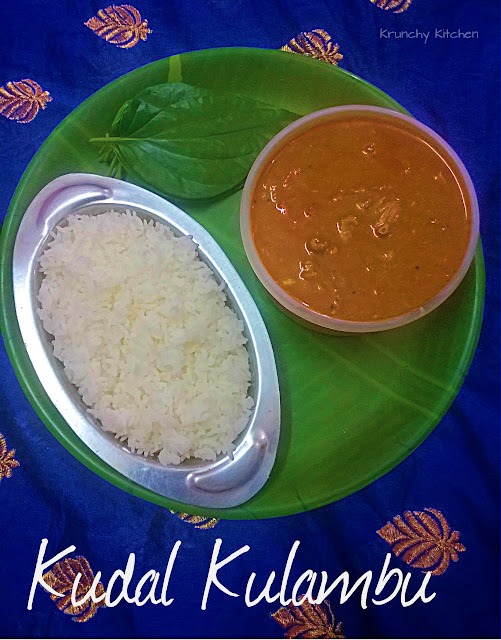 How to clean Kudal

Aatu Kudal - The Lamb Intestine is used to prepare Kudal Kulambu, because it gives a great taste. Making curry using Kudal is easy but cleaning it will take time. In cleaning process we have ensure that there is no smell and extras of kudal we actually get. This process includes many tips and we have to do it perfect to get properly cleaned aatu kudal. I could see many peoples who like and want eat Kudal Kulambu, but unfortunately they don't to clean it properly. Hope this post will be useful for those who want to make Kudal Kulambu in home.My dad is expert in cleaning Kudal, he teaches mom and I learnt it from her. But for the post I asked my mom to clean and i clicked the pictures. 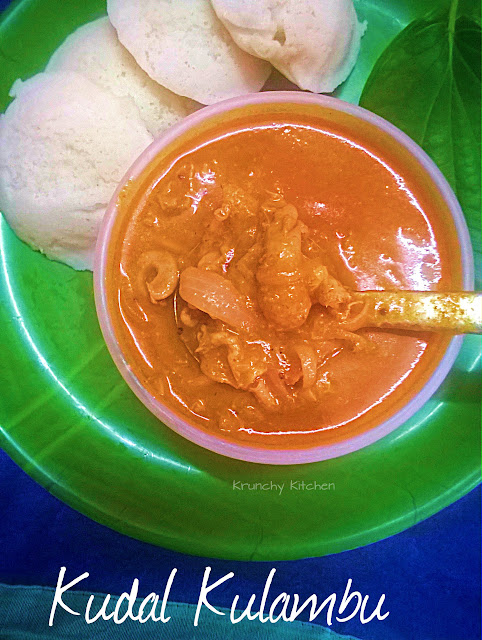 Read more »
Posted by Krunchy Kitchen at 02:12 No comments:

From the day one i started cooking i took a decision should not follow my mom's recipe because then in our home both will cook in same taste finally my dad will get bored. Thought my mom's Chicken Biryani is the world's best Biryani and since this is my first try in Chicken Biryani i taught to following my mom's recipe itself. I have included the step of putting dum. Thought it is not the proper way of putting dum to Chicken Biryani, I did this because it is simple and can be done in home easily and gives a good taste and nice texture to Chicken Biryani. Don't get worried after seeing the recipe ingredients, it's easy and worth to cook.

Many will have it along with any type of Ratia. But actual combination,with Chicken Biryani is Chicken Gravy and that's my dad's favorite. Try eating it once,then it will be your regular combination. 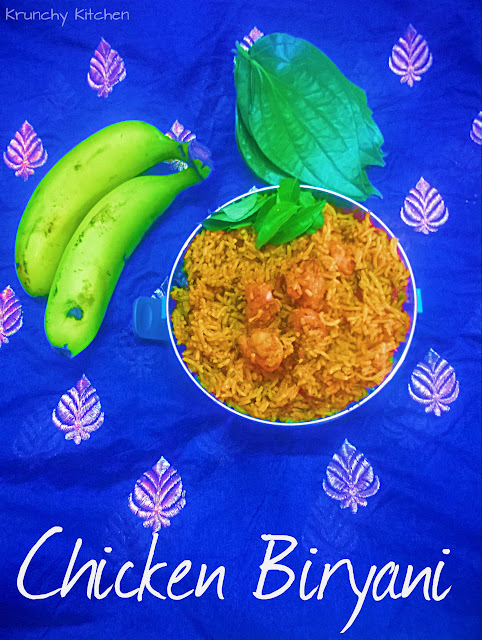 Today is a special day for me and my blog. My blog became one month old. Thank you all for supporting me.It was like just started, but crossed 30 days. I am happy.I can cook in confidence. Now a day’s many around us know me as good cook also. I am new to cooking and I learned cooking pretty recently. I love it a lot. I find time rarely to cook because I step out home by morning 8 and reach back by night 9 after completing my office and evening college. My parents are so supportive towards my cooking and blogging interest. One fine morning Appa said to learn cooking because it will be useful for my future ;-) and I started cooking because I love and respect my Appa.

We used to discuss about cooking in office. Before and all I won’t show much interest towards that but after I stared cooking, one of my colleague guided me to start a food blog and now it was successful 30 days. To celebration it I taught doing a sweet and that ends with Coconut Poli. 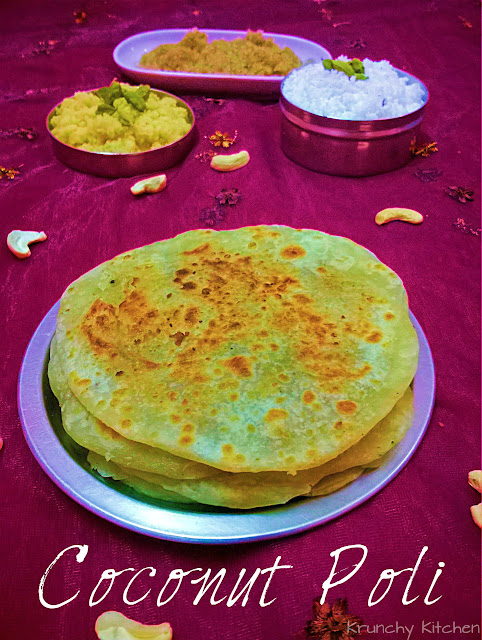 Today is Ramzon. This is not only the festival of Muslims all of us will be expecting this day, especially to eat nice Briyani. Apart from Briyani they will prepare sweets and Payasam. Their special sweet on this day will be Coconut Poli. I dint planned and prepared it I just prepared and it became special. I joined my present on company on Bakrid and my blog’s first month comes on Ramzon, both are not planned it just happened. So this Coconut Poli is to celebrate both Ramzon and my blog’s first month birthday. 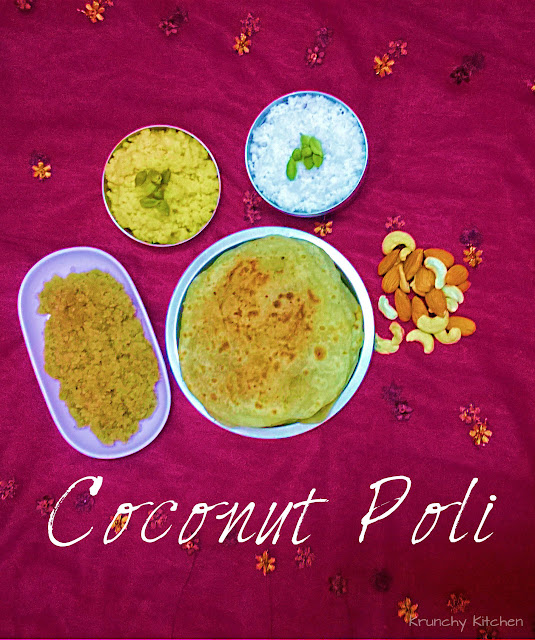 Variety rice fills most of us lunch box, because it is easy to eat. In that list Tomato Rice comes first. Amma will prepare morning leftover white rice as Tomato Rice for dinner.My Attai also do the same. Since i wont eat non veg, mostly Tomato Rice will be my Sunday lunch (or any variety rice). Hence it is easy to prepare i did it last Sunday.
Tomato Rice with curd, lemon pickle & applam is a great combination. 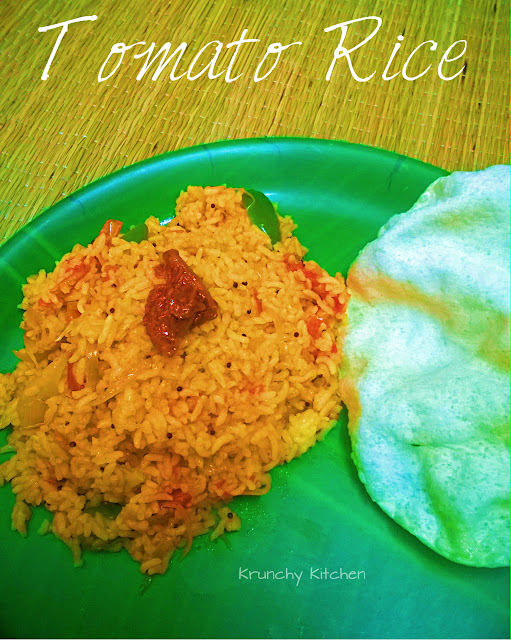 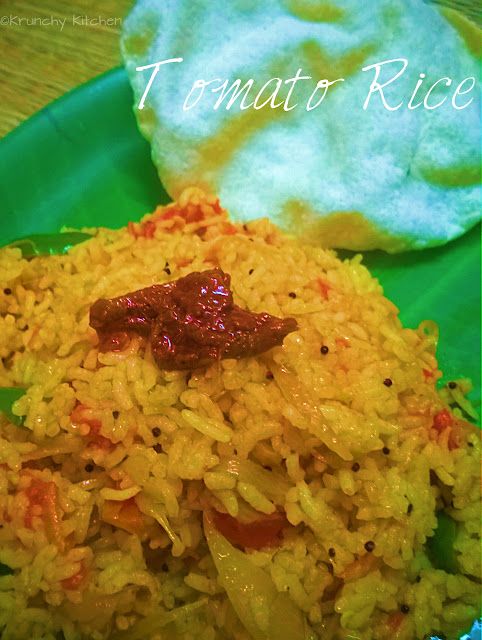 In all types of upma, Rava Upma will have a special and unique taste. Either sweeten or salted it gives a good taste. Even Upma haters will like this Rava Upma. Its easy and quick to prepare. I will do experiments in Rava Upma like if i decided to have it with sugar, then i wont add salt while preparing. But Rava Upma,Curd and Lemon Pickle is an unbeatable combination. As per your taste you can also add vegetables but to enjoy the taste of rava prepare plain Rava Upma and enjoy. As i told already, you can prepare as sweet or salt version no problem it will get adjusted and gives a great taste. 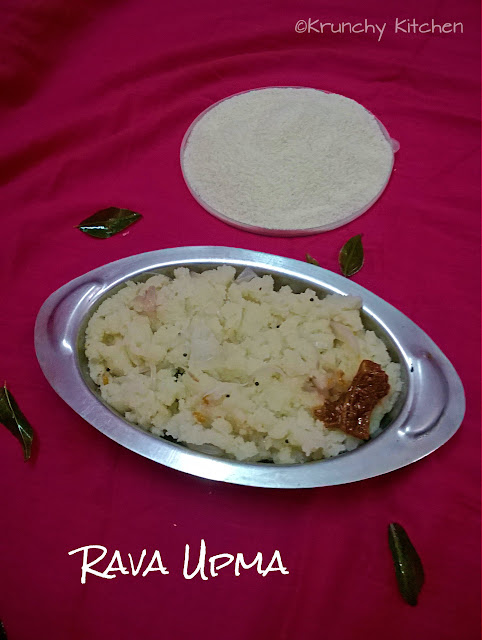 Feeding meal to the kid is the world's toughest job. Making them to eat healthy is the biggest task. Meal Prepared for kids should be healthy, tasty and should looks attractive. We have to be very careful in the ingredient we add. We have to take an extra care over cooking to kids if they didn't like means then our effort and food will get wasted.

By keeping this in mind i taught of doing some thing different into the regular cooking. In that Aloo Chapathi for kids is my first try. I just modified the size of the Chapathi's and my thambu like it. One more think we should keep in mind is, kids wont eat only the main dish we have to give two or three together for a meal to fill their tummy..

Aloo Chapathi i prepared for my thambu he like it. Hope your home kids also like it just give a try.. 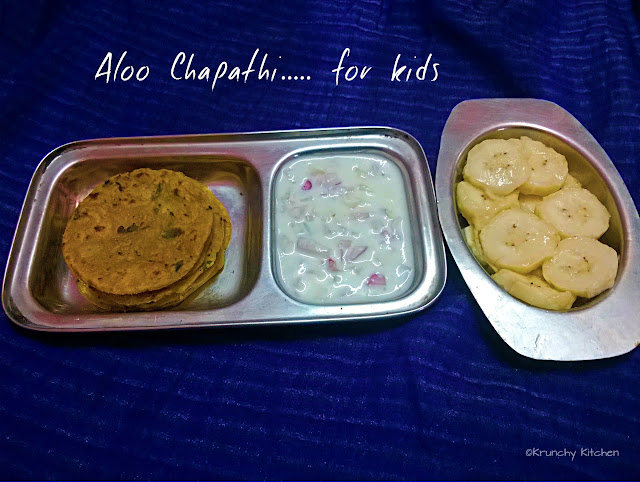 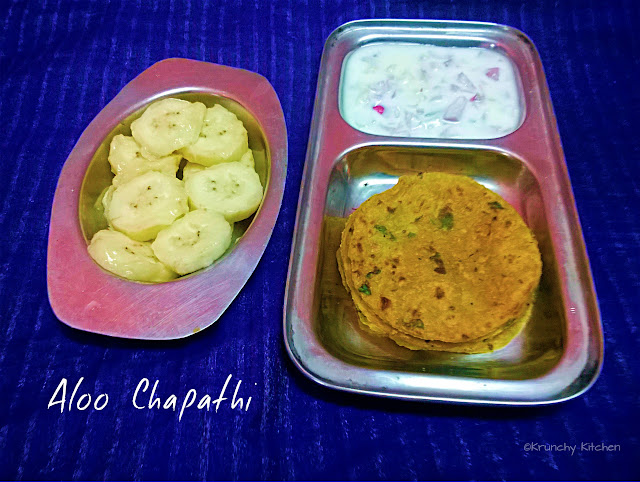 Read more »
Posted by Krunchy Kitchen at 04:32 No comments:

I am fond of Sandwiches. I love it a lot. I will be happy if sandwiches replaces my meal. The fresh sandwiches are easy to prepare and tasty to eat. The only sandwich my mom prepare is french toast i was bored to eat it so after i started cooking i decided to learn sandwiches.In that the first try is Peanut Butter Sandwich, it is very easy to prepare when comparing with other sandwiches.

Generally i wont like butter but one day in my office i tasted this Peanut Butter and i became fan of this, but i cant able to eat alone so i made as sandwich and enjoyed eating it. One fine evening i prepare and packed to my college all my classmate friends ate well and said it was different and sooooooooo gooooooood.

I had it instead of Breakfast with a glass of Muskmelon Juice and a piece of Mango. I feel filled for a long time. Already three para's of introduction is over, i hope i was boring with my stories so lets go in preparing the Peanut Butter Sandwiches. It can be served as snacks too. 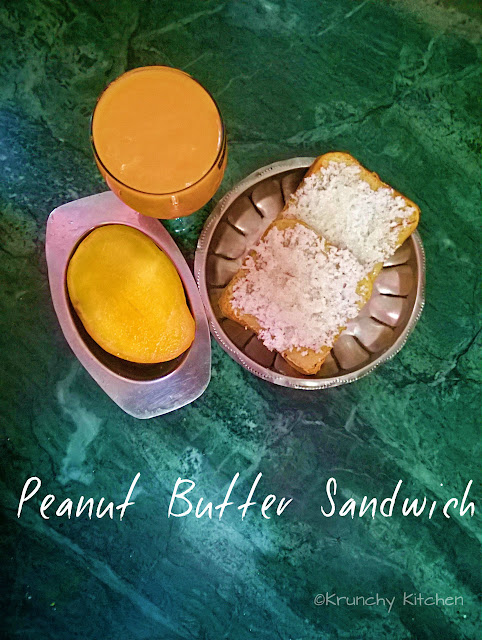 Aloo Chapathi, is my favorite. Before and all I thought it is tough to prepare, takes long time and only expert can prepare it, once after i saw Aloo Chapathi recipe preparation in internet then i taught of trying it still i had a hesitation thought i made it perfect in my first attempt. My dad loves it. Presently he was making ready of my marriage menu after eating Aloo Chapathi, he included this to the menu. My mom also gave a credit that I have learnt cooking quickly and tasty. Now Aloo Chapathi prepared by me became my families favorite food. We started cooking Aloo Chapathi often in our home for dinner and break fast too. 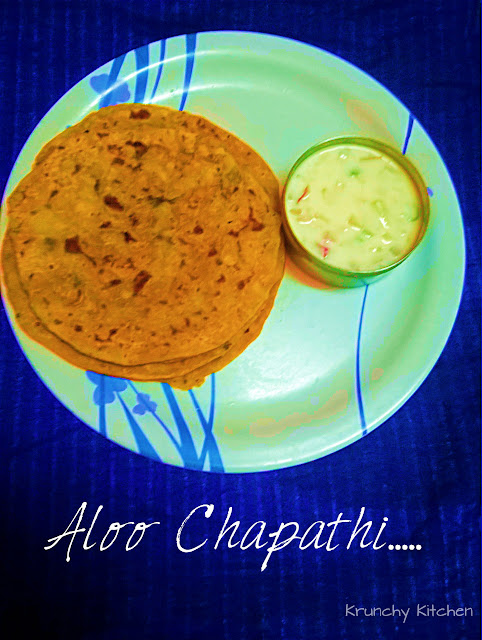 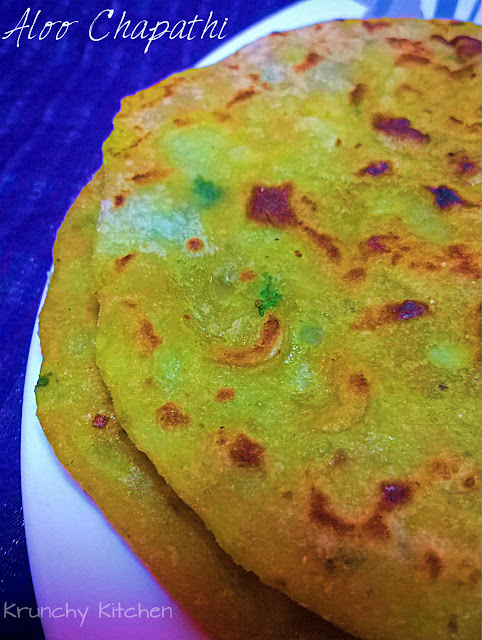 Read more »
Posted by Krunchy Kitchen at 01:37 No comments:

Potato Masala is easy to cook and tasty to eat. Its specialty is it will get adapted with all dishes easily. 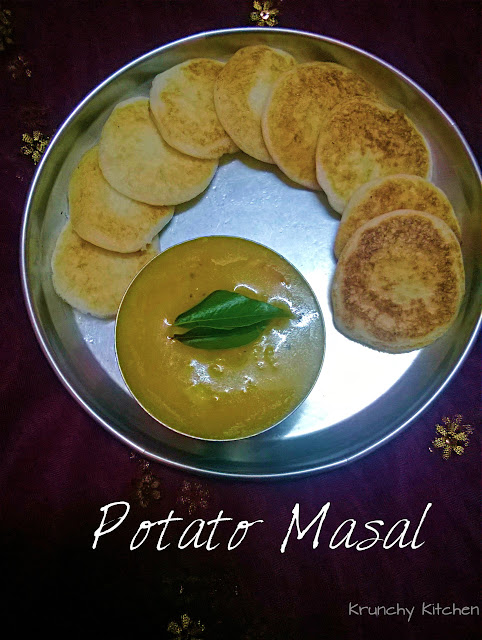 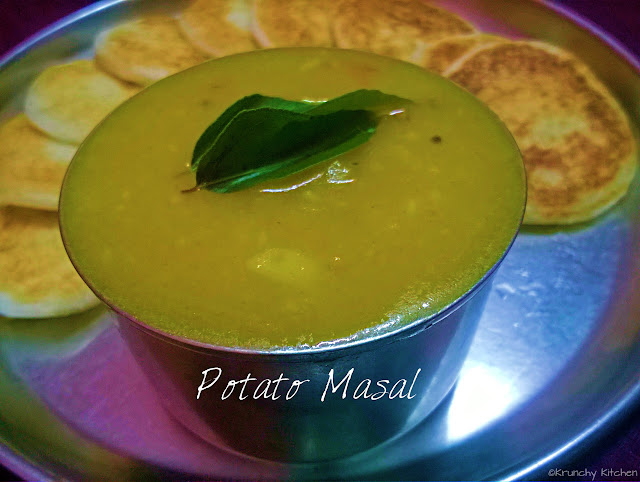 This type of Chicken Kulambu goes well with Plain Rice. 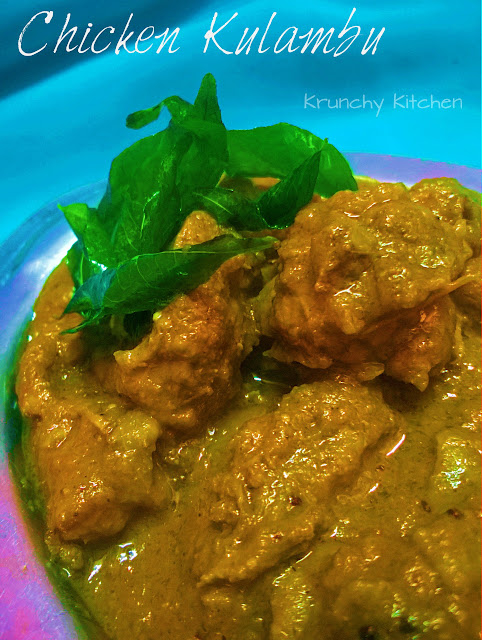 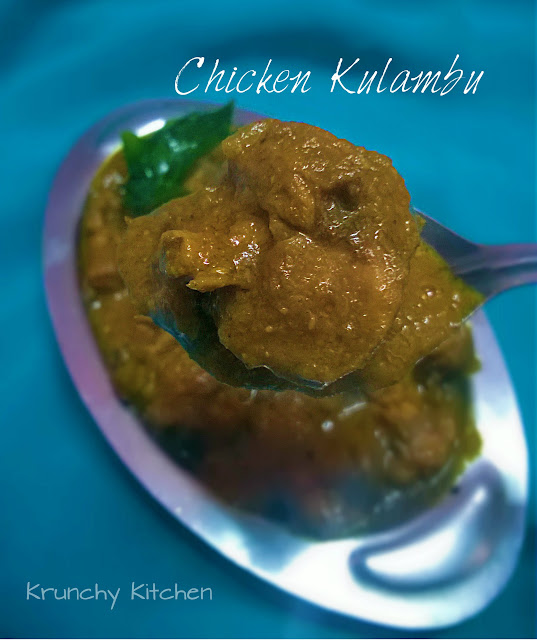 Read more »
Posted by Krunchy Kitchen at 23:07 No comments:

Search within my blog